“I would never drop out of a race again.” 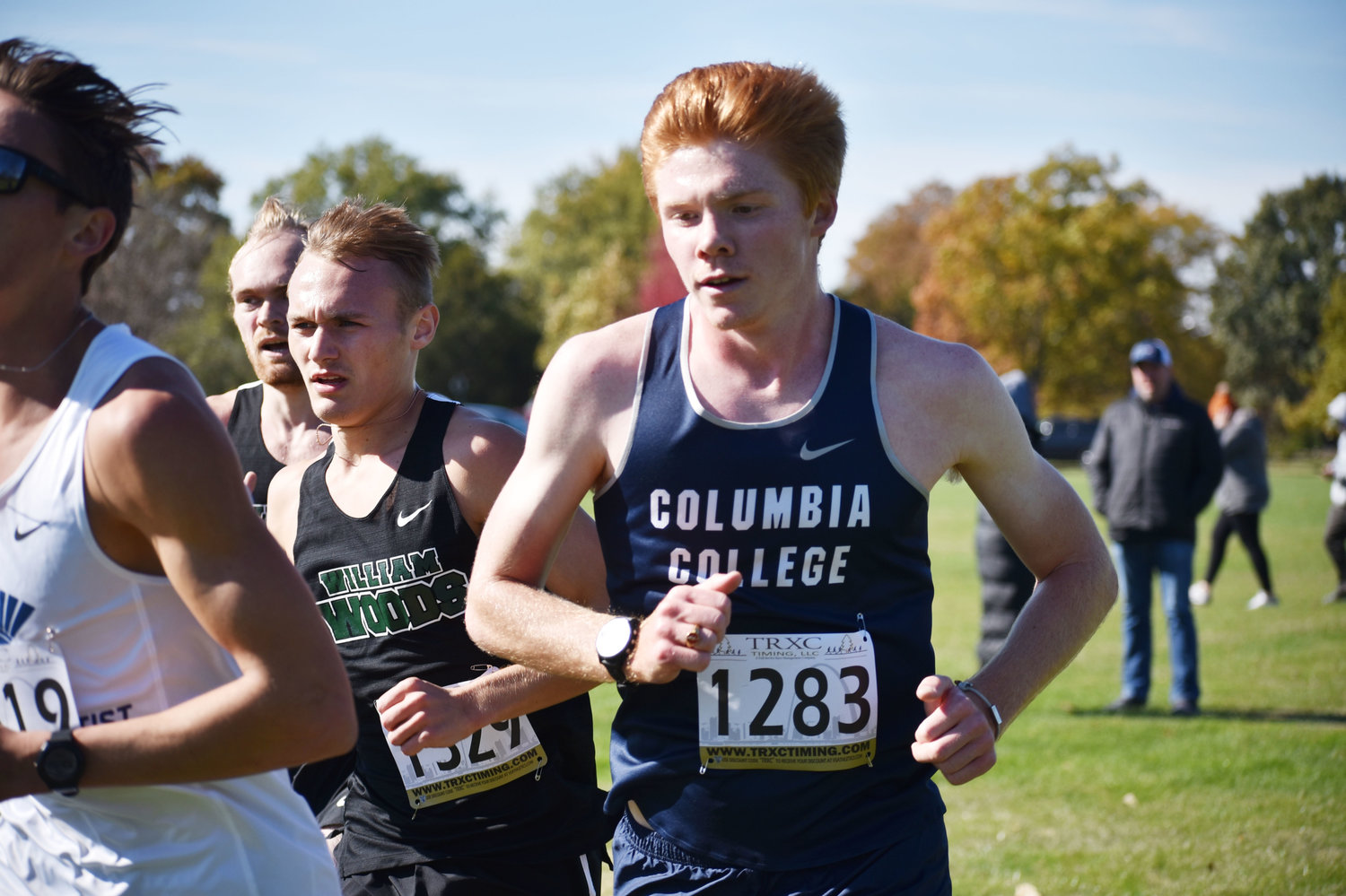 Mexico alum and Columbia College distance runner Alex Dukes competes Nov. 5 in the American Midwest Conference Championships. Dukes became a track and field All-American on May 27 after finishing as the runner-up in the half marathon.
Submitted photo
Posted Wednesday, June 22, 2022 10:19 am
By Jeremy Jacob, Sports Editor

“I would never drop out of a race again.”

That was the promise made by Mexico alum and Columbia College distance runner Alex Dukes to his coaches after being forced to drop out of a marathon in 2019 at the NAIA Track & Field National Championships. He was just a freshman then, and this past May, Dukes was the runner-up in the half marathon race at nationals to make him the first track All-American out of Mexico since Malik Holman in 2018.

During the 2019 race, Dukes said his coaches told him to pull out about 20 miles into the race for safety reasons. This year, Dukes didn’t get the satisfaction of completing a marathon at nationals since the NAIA cut the race down to a half marathon to keep runners safe in the warm and humid weather in Gulf Shores, Alabama. Still, he’s glad he was just able to run at nationals this season after sustaining an injury late last season that limited his cross country season to three races this year.

“I am still pretty upset about that, that I had to drop out of that race,” Dukes said. “It’s been a few years since I’ve been able to redo that race. I was really glad that I was able to go out to that race to begin with.”

Dukes said he lost his sophomore year because of the COVID-19 pandemic and his junior season was cut short due to a stress fracture in his shin. After building himself back up during the track season, he felt he was finally able to show what he was capable and reap the benefits of his extended plan.

Just as runners have to keep a constant pace during lengthy races, Dukes said he has maintained a plan to better prepare his body for races that he started refining in high school, where he was a two-time all-state runner in cross country in 2016-17 and an all-state athlete in track in 2018.

Finding an adequate amount of sleep as a college student can be difficult, Dukes admitted, but he aims for 7-8 hours of sleep per night so his body can recover and avoid injury. A big change he made during high school was when he started cutting out sweet foods completely from his diet during competition as the body works a lot like a car, Dukes said.

“You can be training just as great as ever, but if you don’t put the right fuel in the gas tank, it’s just like a car engine,” Dukes said. “You put a lot of sugar in that gas tank, it’s not going to run very well. During the season, I usually don’t eat sweets. It’s not a huge struggle for me to cut out sweets altogether.

“You really have to be on top of it for all aspects of training of eating and sleeping in order to have a good season or race.”

Staying on top of it means also running at consistent schedule that is without long layoffs. The biggest break Dukes said he takes from running is about a half week or perhaps close to a full week after the end of the season before doing some more running because taking more than 3-4 days off in a row leads to the loss of fitness that has to be built back up again in about 1-2 weeks. Athletes in other sports may show some rust after taking a week off for vacation, for example, Dukes said, but the appropriate adjustments can be made much sooner than is the case with running.

Because of the nature of his sport, Dukes said he was well-prepared to run the full marathon this season before the NAIA changed it to a half marathon in February after 18 of 30 runners were able to finish the marathon last year. Dukes had one chance to qualify for half marathon at nationals in May and did so by hitting the “A” standard in March, his Columbia College distance coach Daniel Radkowiec said. Other than that, Dukes said he and his teammates go on long runs of about 19-20 miles during the season even if the race he maxes out at is 6.2 miles for the 10,000-meter run.

“You have to stay constant in your training,” Dukes said. “You have to continually train throughout the year. It’s not something you can take huge breaks on.”

Radkowiec, who spent this past season as the interim cross country and track and field head coach, said Dukes is “the hardest worker on the team,” and the real question was not if Dukes would be in the top eight for All-American honors but where in the top eight.

Dukes finishing as the national runner-up is a good example of how hard work pays off, Radkowiec said, as he called Dukes’ training regimen consistent, which means “the longer he runs, the better he does.”

“One thing that makes him so good is he pays attention to all aspects of running,” Radkowiec said. “Not just training, but the eating, the sleeping, the stretching. All those little things add up for sure.”

Radkowiec said the NAIA is unique in offering a race even as long as the half marathon as the NCAA, for instance, tops out at 10,000 meters. The course in Gulf Shores is at a state park on a paved course with many water stations, spots for spectators and a start and finish line that are in close proximity. Runners complete the course two times before the finish.

After the announcement earlier in the year of a shortened race, Radkowiec remembers Dukes being disappointed as he was “geared up” to run the full 26.2 miles and is sure that Dukes could have “kept on running” after the 13.1 miles was reached. He also remembers Dukes qualifying for the marathon as a freshman in 2019 after hitting the standard in the half marathon earlier in the year.

“Since he was so young at the time, myself and the other coach, we made the decision to only allow him to run 20 miles just because, typically, you don’t see too many 18-year-olds run the full distance,” Radkowiec said. “His freshman year, it was more just a good experience to see the course and to get an understanding of the race itself at the collegiate level.”

As for the race this year, Dukes said he started “fast and relaxed” instead of “guns on fire” and the pack at the beginning of the race started separating around 5-6 miles. At that same point, Life University’s Christian Colon gained some distance, and Dukes said he tried to catch up but realized there was too much ground to cover.

From there, Dukes said he wanted to “at least hold the hard pace,” which led to him being among the three behind Colon around 9-10 miles. Dukes recalls being “shoulder to shoulder” with the third-place runner, Montreat College’s Nathan Richards, until the last half mile when Dukes used his “kick,” or last bit of energy left in the tank, to finish with a time of 1:09:40 behind Colon’s 1:09:06.

“In the last bit of the race, you put everything you have in your gas tank into it,” Dukes said. “Aerobic is oxygen-based so as long as you’re breathing, as long as you have enough fuel in your system, you can maintain that for a very long time.That way, whenever you get to the end of the race, your anaerobic gas tank is completely full so you’re going to have that strong kick, that surge at the end of the race, when everybody else may have already used their anaerobic energy to just maintain their pace.”

Dukes said he has more left in the tank for his final year of eligibility that he was given for missing out on a season in 2020 due to the pandemic, and what’s great for him is that he’ll be able to compete in cross country and the indoor and outdoor track seasons. But while he has high hopes for the end of his collegiate career, he has arrived at this marker in his life.

Dukes’ running background can be traced back to elementary school when he said his parents would go out on runs with him, and his mother, who ran cross country in high school and college, started a program that gave children some exercise and gave Dukes early interest in the sport. He then discovered he had a gift for it when he ran track and cross country in middle school, and from there through high school and college, his parents have given support from making sure Dukes is prepared before a race to cheering him on during a race.

“They’ve never missed one of my races,” Dukes said. “They’ve always been there for me to help me out as I’ve went through my running career, and it’s really made a difference. I don’t think I’d be where I am today without them helping me.”

Radkowiec said Dukes is someone who always holds himself accountable so his body never takes too much of a toll that is brought on by the constant cyclical motion of running. Dukes is also someone that tries to accomplish more and more.

“He’s just going to continue to get better now that he’s healthy,” Radkowiec said. “He was All-American in cross country his sophomore year so he’ll have a goal to place higher than he did in cross country. For indoor and outdoor, it’s to qualify for nationals and put himself in a position to get All-American again.”

Dukes said he is enjoying the sweets now, but when his final year draws closer, his consistent routine will go into full effect so he can make the most of this opportunity.