With the help of the U.S. Marshal’s Service in the Eastern District of Missouri, Kevin Lorenzo Jackson, A/K/A “Shootah,” age 20 of Mexico, was arrested in Jefferson City on the … 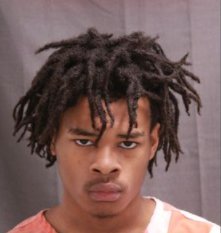 With the help of the U.S. Marshal’s Service in the Eastern District of Missouri, Kevin Lorenzo Jackson, A/K/A “Shootah,” age 20 of Mexico, was arrested in Jefferson City on the outstanding Audrain County Warrants of Arrest for Robbery and Armed Criminal Action.

According to Audrain County Sheriff Matt Oller, the robbery charge resulted from an investigation by the Sheriff’s Office that allegedly occurred south of Mexico on Nov. 6.

The report states that Jackson pointed a gun at a victim during a drug deal and stole cash and a pistol.

“Once warrants were issued, we heard Jackson had fled the area. So we asked the United States Marshals Service to use the information we knew about him and see if they could determine a “footprint” where all of these things were being used,” said Sheriff Oller.

At the time of his arrest, Jackson was in possession of two firearms, one of which was reported stolen from Audrain County.

“We have a great relationship with the U.S. Marshal’s Service in the Eastern District of Missouri. The US Marshal there is a former Sheriff, John Jordan from Cape Girardeau County,” said Sheriff Oller. “John is always willing to answer the phone and help us with things like this when we ask, and I can’t speak highly enough of our relationship with Marshal Jordan’s staff.”

By law, a bond hearing would take place within forty-eight hours after an arrest was made and a second bond hearing within seven days of the first hearing.

Jackson was also a suspect in a shooting case carried out by the Mexico PSD.

Fairgrounds Aquatic Center to open May 28

Fairgrounds Aquatic Center to open May 28

Summer is in the air and Mexico’s Fairgrounds Aquatic Center is gearing up for its encore season.Set to open Saturday, May 28, workers are busy getting everything in order. Daily hours of …

It may be a few months away, but area residents take note: The Relay for Life of Audrain County will be held Saturday, Sept. 10 at 6 p.m. on the Mexico downtown square. The six-hour fundraising event …

Recently, the Mexico School District was made aware of an incident involving the PE teacher at Eugene Field. As a matter of protocol, the teacher was immediately placed on paid administrative …
Read the eedition