MMA tennis not done having fun after 4th place at state

The Missouri Military Academy is a boarding school with rigid rules. That doesn’t mean the tennis team can’t have some fun.

The Colonels had an enjoyable season all the way to the …

MMA tennis not done having fun after 4th place at state 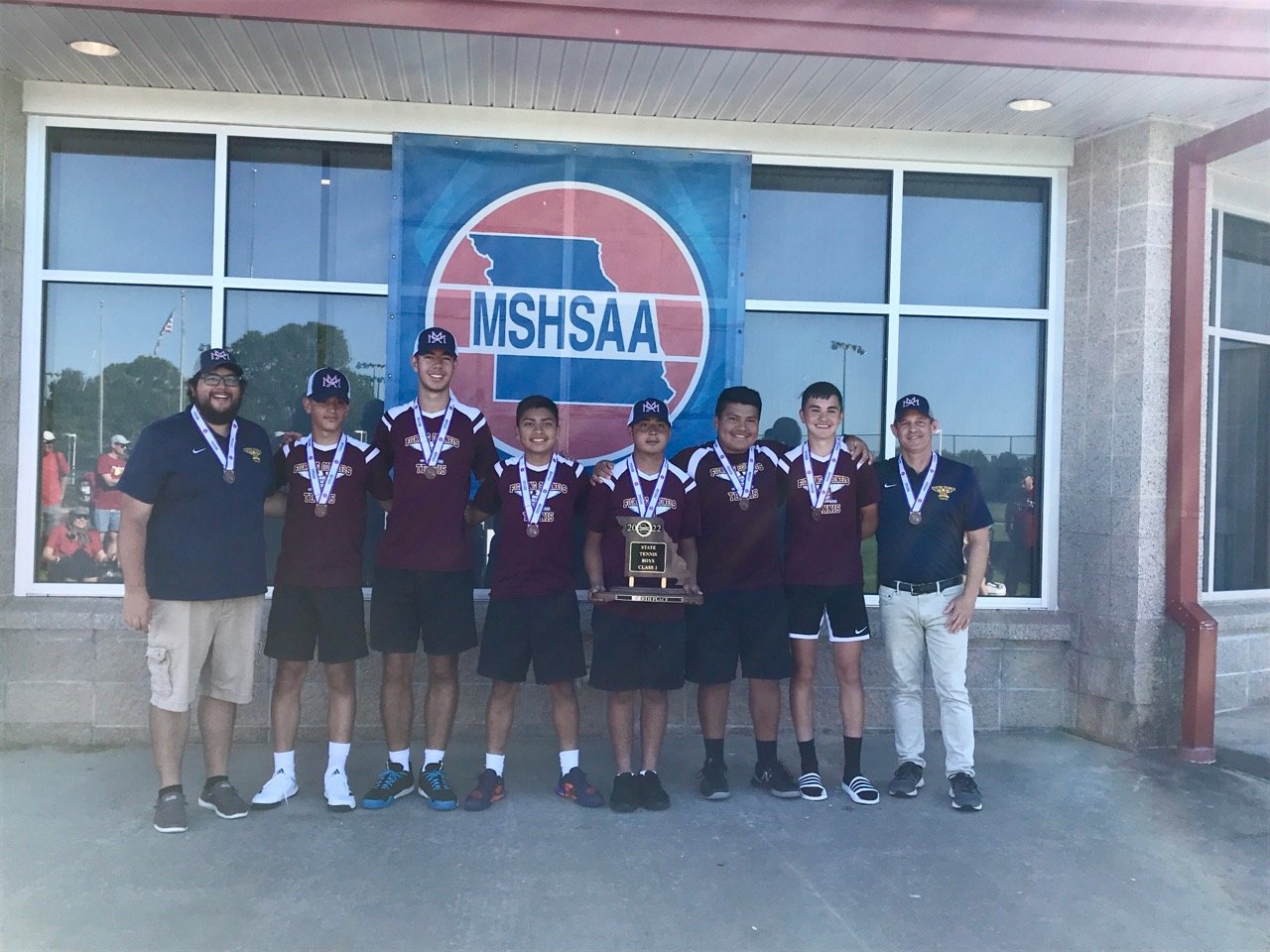 The Missouri Military Academy is a boarding school with rigid rules. That doesn’t mean the tennis team can’t have some fun.

The Colonels had an enjoyable season all the way to the Class 1 state Final Four — their first since 1992 — losing two team duals May 27 in Springfield at the Cooper Tennis Complex to take fourth in the state.

“We played really hard, and we lost really close matches,” MMA head tennis coach Brad Smith said. “We were competitive. We deserved to be there. They were more confident hitting their shots and going for it. They were playing to win, not playing to not lose.”

The Final Four appearance is also MMA’s first overall athletics one since 1992 after going 11-3 this season and 23-4 during the last two seasons. In the five seasons prior to that, the Colonels compiled a 19-35 record.

Last year, Smith stepped in as the head coach after five years with his alma mater Mexico, with four of those years spent as the head coach. As far as what Smith brought to the MMA program upon his arrival, he said it was simply providing his boys with a space to have fun in a military boarding school, with its rules and schedules, and a comfortable atmosphere for his out-of-state players — such as brothers sophomore Samuel and junior Simon Way from Georgia, sophomore Nathan Dempsey from Texas, freshman Luis Orozco-Navarro and sophomore Jose Angiano from Mexico City, and junior Gorka Yarte-Zertuche from Portugal.

“I tried to give them experience that is enjoyable so that they are enjoying tennis the whole time,” Smith said. “I definitely strove to make tennis practice the joy of their day. We try to play games and we laugh and we joke. We let the competition take over just a little bit. I let them play against each other. Sometimes, there is a little trash talk on the court between the boys, which they enjoy and I never let it get out of hand. We just try to keep a happy atmosphere and also a hardworking atmosphere.

“I don’t yell at the kids when they miss a shot. Part of tennis is you’re going to miss shots, and you have to be OK with missing shots. Pros always miss shots. I say, ‘So are you saying you are better than pros?’ That usually gets them out of their funk.”

MMA lost 5-1 to eventual state champion Warrensburg on Friday after losing a couple three-set matches via tiebreakers. Samuel Way lost the No. 3 singles match to Quinn Conley, dropping the first set 6-1 before bouncing back to win the second 6-1. Way came up short in the third set by a score of 10-8. His brother, Simon Way, had a better start in the No. 5 singles match against Anthony Rehn, winning the first set 6-3 before dropping the next two sets 6-1 and 10-7.

The sophomore pair of Anguiano and Dempsey won the No. 3 doubles match 8-6, defeating Rehn and Grant Moore, for the Colonels’ only point, but Smith said he likes how his team played overall. There were some times, particularly in each Way singles matches, that Warrensburg hung tough and made the plays late that win state titles.

“We have a pretty young team — no seniors — and (the Ways) both played against players who were very strong-minded,” Smith said. “They just never gave up. I think my boys thought they were going to go away, and then they didn’t. The matches took almost two hours for singles so they went back-and-forth the entire match. (My guys) weren’t tired. It was just a battle of will.”

The third-place match against Clayton was a shutout loss for MMA — its first of the year and second in as many years. Clayton handed MMA its other shutout loss in that span as well when the Greyhounds beat the Colonels 5-0 to eliminate them one round away from last year’s state Final Four.

Smith said he liked how the singles round this year against Clayton was going for his team as the Colonels were leading in four singles matches, but they all went unfinished as Clayton had already won enough points to win the dual, taking all three doubles matches by scores of 8-2, 8-4 and 8-5. In singles, Anguiano was beaten by Kensei Tseng in straight sets in the No. 4 singles match, dropping the second set 7-5 after a 6-3 decision in the first set. Samuel Way lost the No. 3 singles match to Anurag Venigalla 6-1, 6-1, developing a blister on his finger that made holding the racket difficult.

“Clayton is a very good doubles school,” Smith said. “All three of their doubles teams were fantastic so we thought we were going to lose those. Then we just got down in a hole. It was one of those where the strategy was to conserve a little energy in doubles to run it back and win all of the singles matches.”

Smith said becoming accustomed to MMA’s competition in districts and in the state tournament left the Colonels more prepared this time around and last more than any MMA team has in 30 years.

In the previous two years, the Colonels were 10-0 against district opponents inside and outside of the district tournament winning 65 out of a possible 76 points in team duals. In their three sectional victories in that span, they won 16 out of 17 possible points.

“I think the way that the districts and sectionals were announced this year gave us the best opportunity (to succeed),” Smith said. “We knew that we were playing a lot of schools around here, and we play all of the schools around here already. Over the last two years, we’ve beaten them all.”

Smith said he did lose his No. 1 from a year ago — Isaac Way — along with another Colonel to graduation, but everyone else this year was there last year during the first postseason run and loss to Clayton.

“What got us off guard last year was we hadn’t seen that level of competition so we weren’t ready for it when we finally saw it,” Smith said. “This year, we knew what we were getting into so we were a lot more diligent in practice and against other schools. We kept our heads down and hit the ball hard no matter how our opponents looked like.”

In state singles competition May 20 in Springfield, Yarte-Zertuche lost 6-1, 6-0 to Whitfield’s Daniel Radke and then dropped a match to Logan-Rogersville’s Jacob Zimmerman by score of 6-3, 3-6, 10-6. On that same day, the Colonels doubles pairings of Anguiano and Dempsey and Samuel and Simon Way lost two matches to be eliminated.

Now that MMA has seen even more high-level competition and will not be losing anyone to graduation, the 2023 Colonels have the highest of goals.

“I think we’re going to take state next year,” Smith said. “I have full confidence that next year is going to be a strong year for us and even the year after. Seeing our success last year, the kids were more committed to making it as far as we could go. Most of my team this year were freshmen and sophomores. We have good leaders coming back, and we have strong competitors coming back.”